I was invited to give a presentation on the NEB and the Trans Mountain Review Process. After the presentation I appreciated the comments from the people in attendance and many asked for a copy of my speaking notes.

Provided below is a transcript of my presentation with links (in red) to the sources. 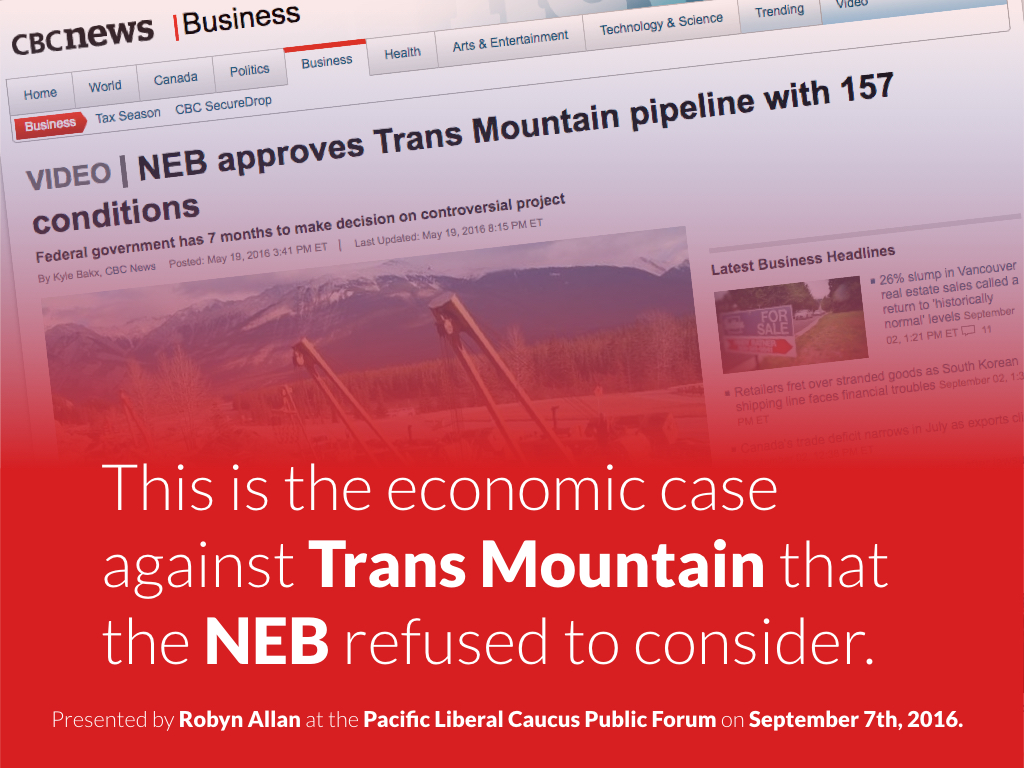 Thank-you for this opportunity to discuss the National Energy Board report and the economics of Trans Mountain’s proposed expansion. 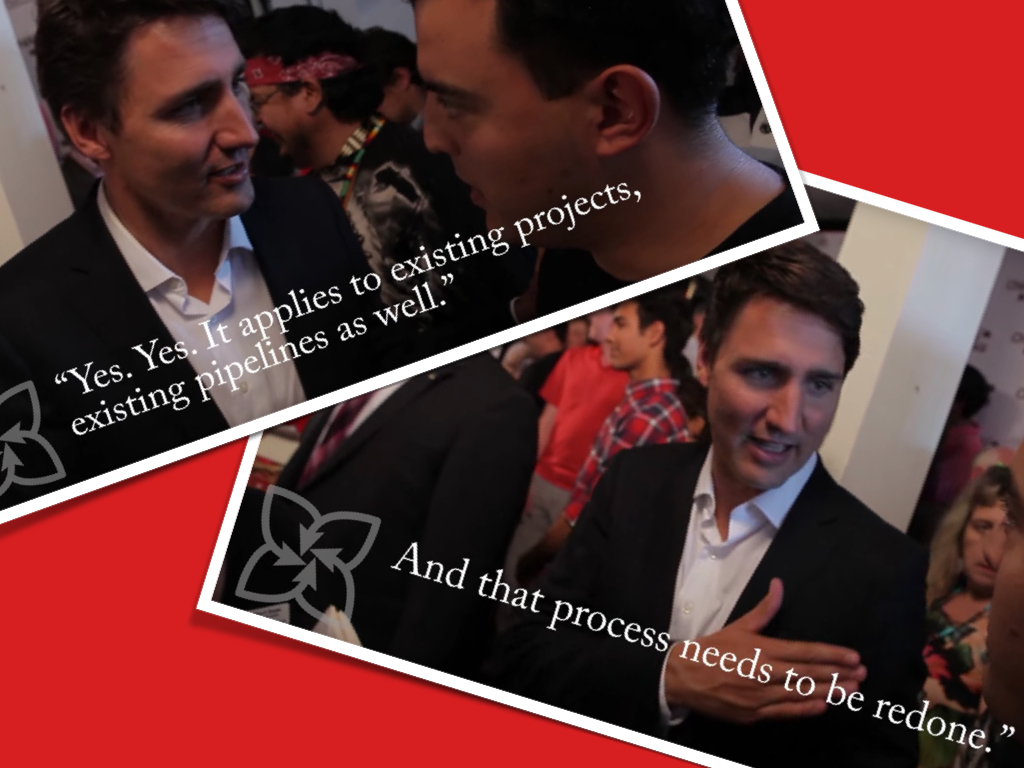 Prime Minister Trudeau recognized this time last year that the NEB could not be trusted. He said the Board had “torqued” reviews making it easy to recommend approval. The Board did this by narrowly scoping issues, removing cross-examination, refusing to compel answers to information requests and by not testing evidence.

Mr. Trudeau said the NEB overhaul would apply to existing reviews—that Trans Mountain’s would be redone. 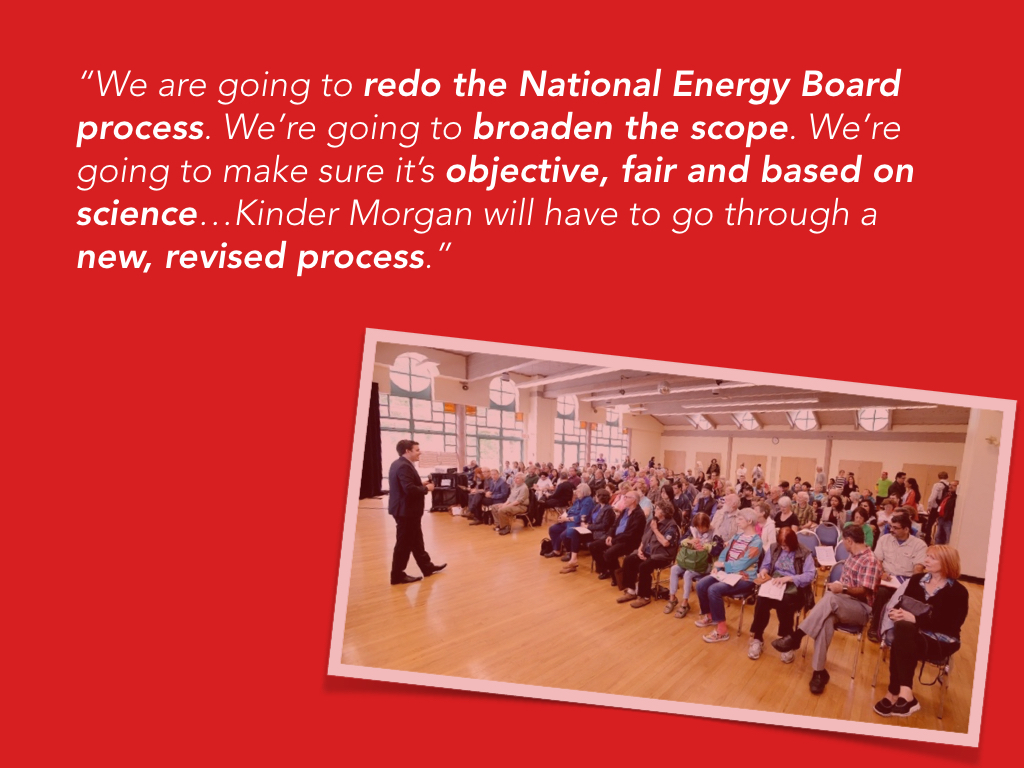 After the election, Mr. Beech confirmed “We are going to redo the National Energy Board process.”

Instead a Ministerial Panel was sent to gather impressions as it travelled the pipeline route. Meetings were poorly administered and poorly advertised. The Panel has no investigative powers or scientific expertise.

Recent statements by Natural Resources Minister, Jim Carr, tell us the fix is in. He said that now his Panel has heard from “opponents” this will lend “credibility” to the Government’s decision in December.

Suggesting that 3-5 minutes in front of an ill-prepared Ministerial Panel is—and I quote Minister Carr—“the right process”—is an insult to the intelligence of the people of Canada.

Caucus members here tonight must take a message back to Ottawa.

Canadians have not been given due process. Without due process, permission for Trans Mountain’s expansion will never be given.

The Harper government stacked the Board with patronage appointments, gutted environmental legislation and politicized the process.

Trans Mountain’s consultant, Steven Kelly, was appointed to the Board even while the NEB review was ongoing.

Lynne Mercier and Jacques Gauthier were reappointed even though their terms did not expire until a month after the Liberal government was sworn in.

This should put to rest any notion that the Board is credible.

What I will focus on tonight is how the NEB parrots Kinder Morgan’s economic narrative and how it uses this in its report to misinform the federal government.

The economic cost of Trans Mountain’s expansion to the Canadian economy—when properly scoped and fully tested—outweigh any economic gains. 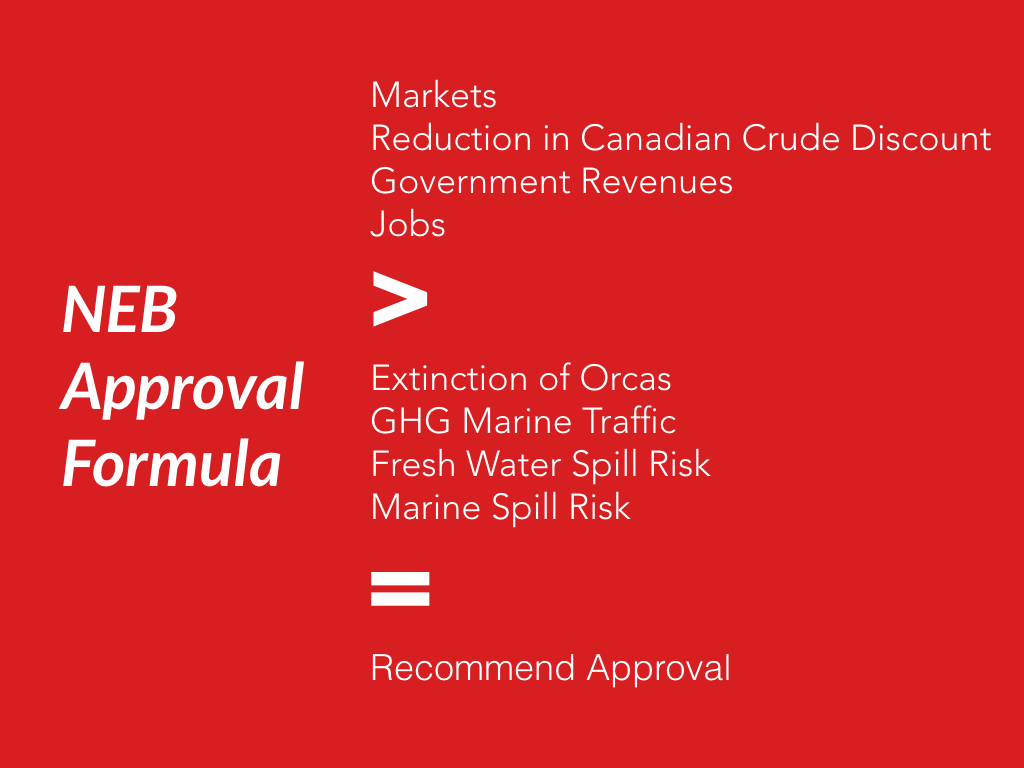 The Board’s report says the benefits are Markets, a Reduction in Canadian Crude Discount, Government Revenues and Jobs. (page xiii and xiv)

The Board puts these Benefits up against Residual Environmental Burdens and claims these benefits exceed burdens so the project should be approved.

There are 13 potential crude oil shippers. None provided evidence on where markets in Asia might exist. None said Trans Mountain’s expansion will reduce price discounts leading to crude oil price lifts.

Offshore markets, and a reduction in crude discounts because of them, are an invention of Trans Mountain’s consultants, Steven Kelly of IHS, and then Neil Earnest of Muse Stancil. 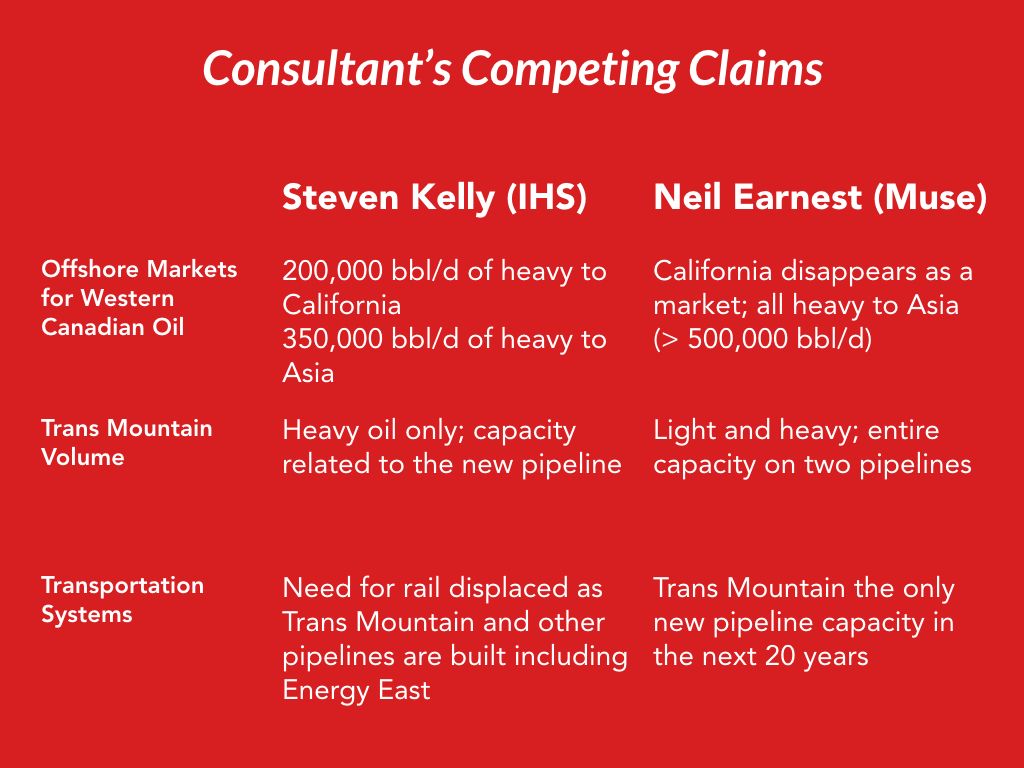 After relying on Mr. Kelly’s report for almost two years it was stricken from the Hearing Record when Mr. Kelly was appointed to the Board.

With Mr. Kelly’s evidence stricken, the Board said it would no longer consider it.

The Board refused to reconcile serious differences about markets from two consultants working for the same proponent at the same hearing.

Asia does not currently receive Alberta’s diluted bitumen—there is no Asian market for Alberta’s oil.

The Board has been promised offshore markets by Kinder Morgan before.

Half a decade ago Kinder Morgan said that if guaranteed access to the Westridge dock was granted, offshore markets—with certainty—would develop. The Board approved Kinder Morgan’s application. 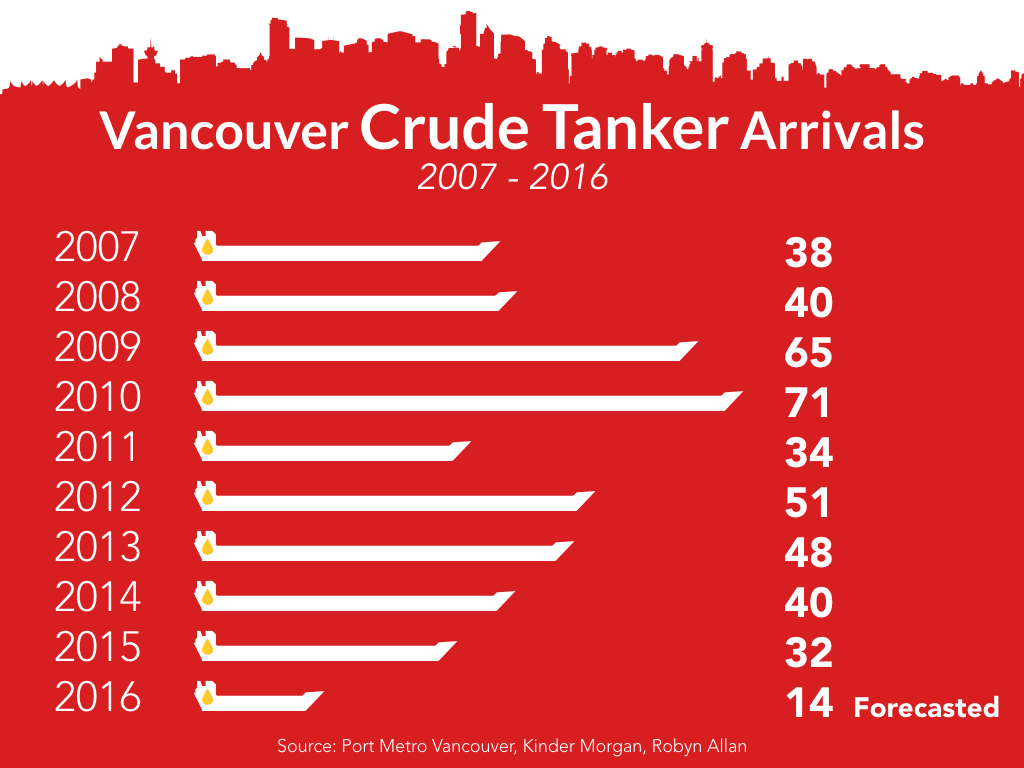 If it had it would know export commodity statistics show no Asian markets for Alberta’s heavy oil.

In its report the NEB states 5 tankers per month are loaded at Westridge. There haven’t been five tankers a month since 2010.

And none of them went to Asia.

So, if markets do not exist, why would oil producers sign 20 year take or pay contracts?

Shippers only said they want the opportunity to develop markets, not that they exist.

Market prospects have seriously deteriorated since 2012 when shippers signed on.

Oil prices then were more than double what they are now. Producers expected to supply a lot more oil.

Why do shippers continue to support the project if market prospects have tanked? 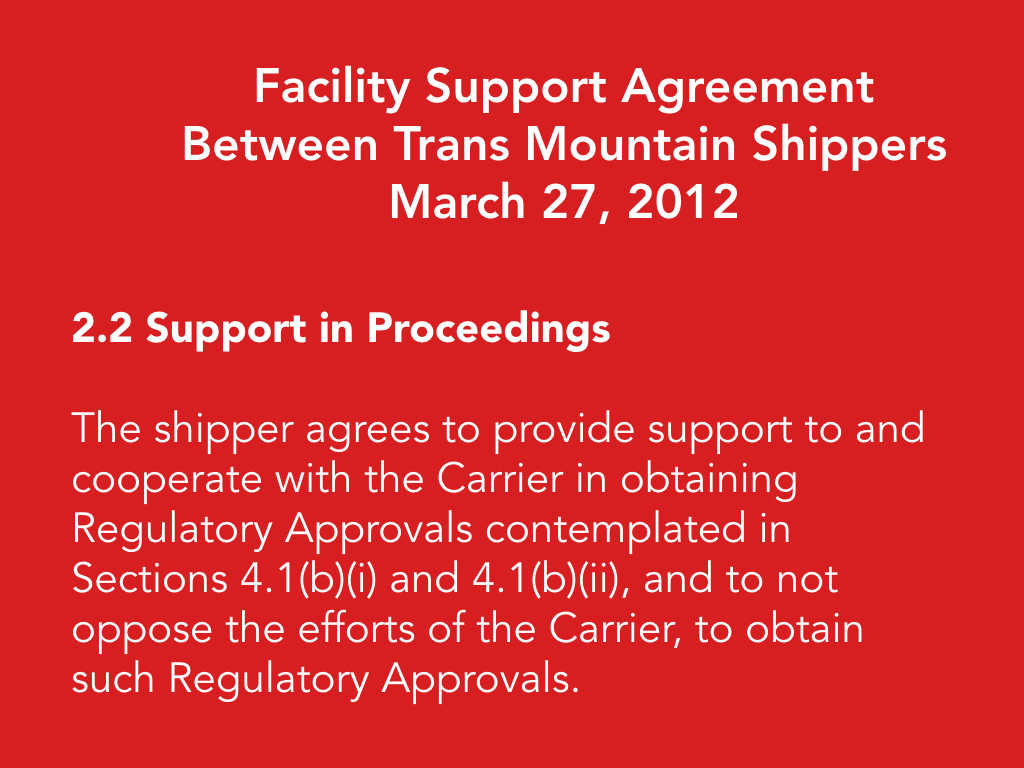 If the Board had read the contracts it would know this. But the NEB Panel never asked Trans Mountain to file the contracts at the hearing so it could read them.

Had the Board read the contracts it would know Clause 3.2 (b) says that if capital costs of the Project exceeds $6.8 billion triggering tolls that exceed the Open Season Toll Limit, shippers can walk. 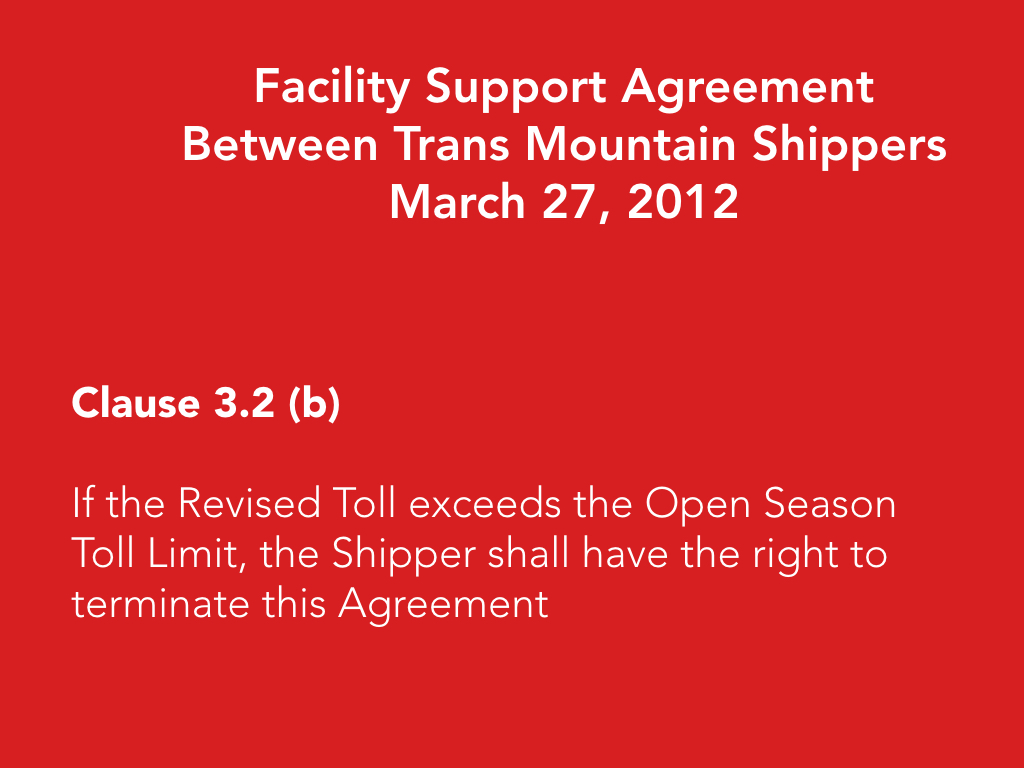 Everyone except the NEB knows that Kinder Morgan raised the capital cost of its project to $6.8 billion. This happened almost a year ago.

The Board did not ask Kinder Morgan to provide an updated capital cost during the hearing. Why? Because it avoids obvious questions… and the Board didn’t want the answers.

A $6.8 billion capital cost compromises the likelihood that shippers will be bound to their contracts.

The Board’s refusal to consider a more accurate capital cost, and the higher toll rates that come with it, meant the Board could accept overstated price lift benefits and pretend Canadian crude price discounts will be reduced. 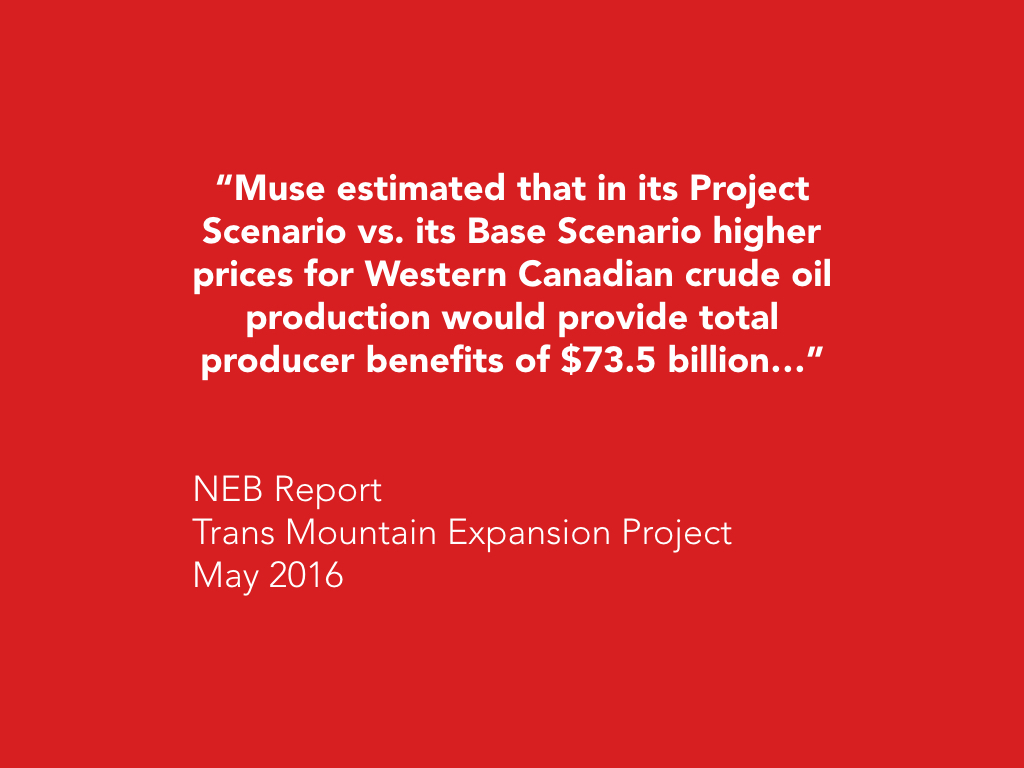 When accurate toll rates are considered Mr Earnest’s price lifts fall by almost 80%. The remaining 20 percent disappear because facts show price discounts for Canadian crude are within the normal range. They have nowhere to be further reduced.

Diluted bitumen always sells at a discount to West Texas Intermediate (WTI). It is a lower quality crude and costs more to refine. It also costs more to transport by pipeline because it is so dense. The crude discount is there because it takes quality considerations and transportation costs into account.

According to an NEB research report (see page 7), the normal discount the Board expects for Western Canadian Select (WCS)—the highest quality of heavy oil—is about $20 US a barrel. 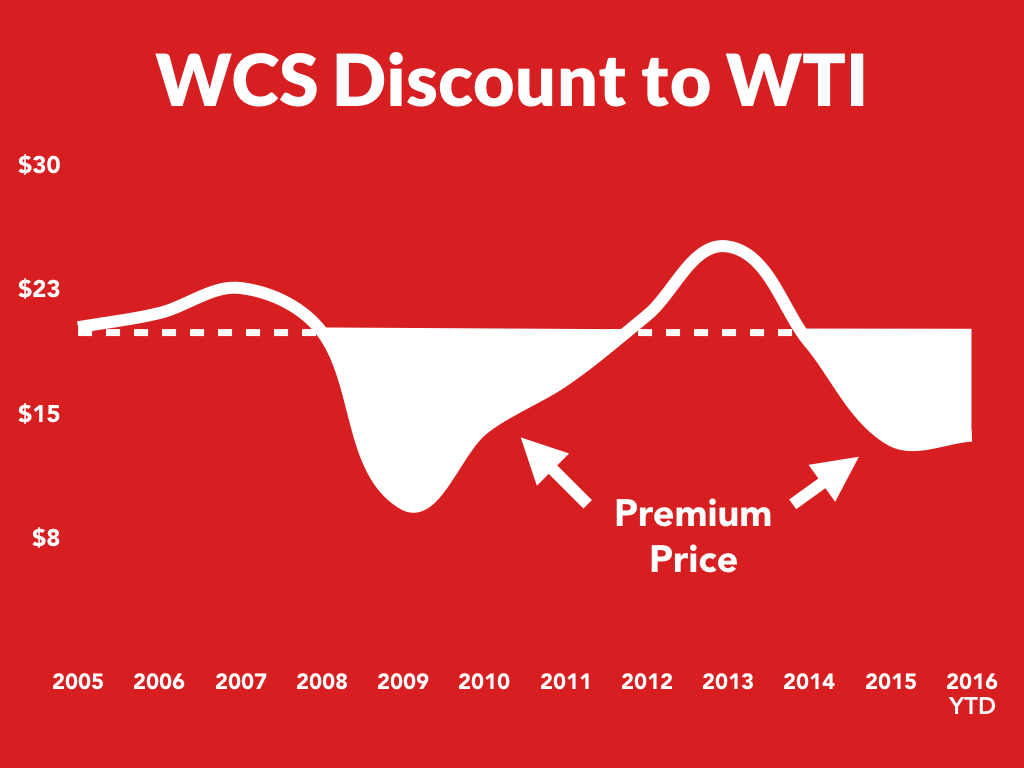 A discount of WCS to WTI of less than $20 US per barrel is considered a premium return for Alberta’s heavy oil. Discounts below the dotted line on the graph represent a premium price.

The average discount for the past year and a half was less than $14 US a barrel.

Had the Board checked prices it would know there is no reduction in discounts for the project to capture.

So what about Government Revenues. The Board claims $28.2 billion over 20 years. 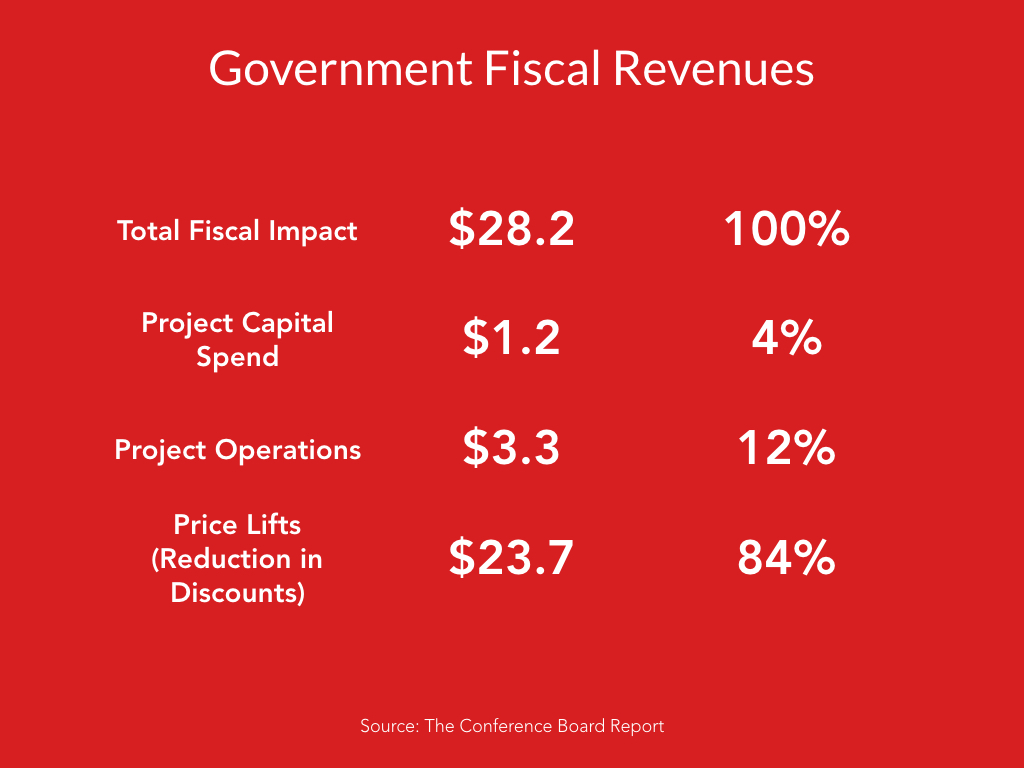 Price lifts are not there so neither is $23.7 billion in tax and royalty revenue related to it.

But, Trans Mountain does not.

Kinder Morgan relies on a complex corporate structure so Trans Mountain hardly pays any corporate tax at all. The Board refused to consider evidence that proves this. The Board claimed the issue was outside the scope of its review.

So, municipalities are concerned that the project represents a net cost, fiscal revenues from price lifts do not exist, and corporate taxes from Project operations are artfully avoided.

As well, the Board refused to look at a myriad of fiscal revenue losses when other sectors are negatively impacted by the Project—it ruled them outside the scope of its review.

Finally, we are left with the Board’s jobs claim. 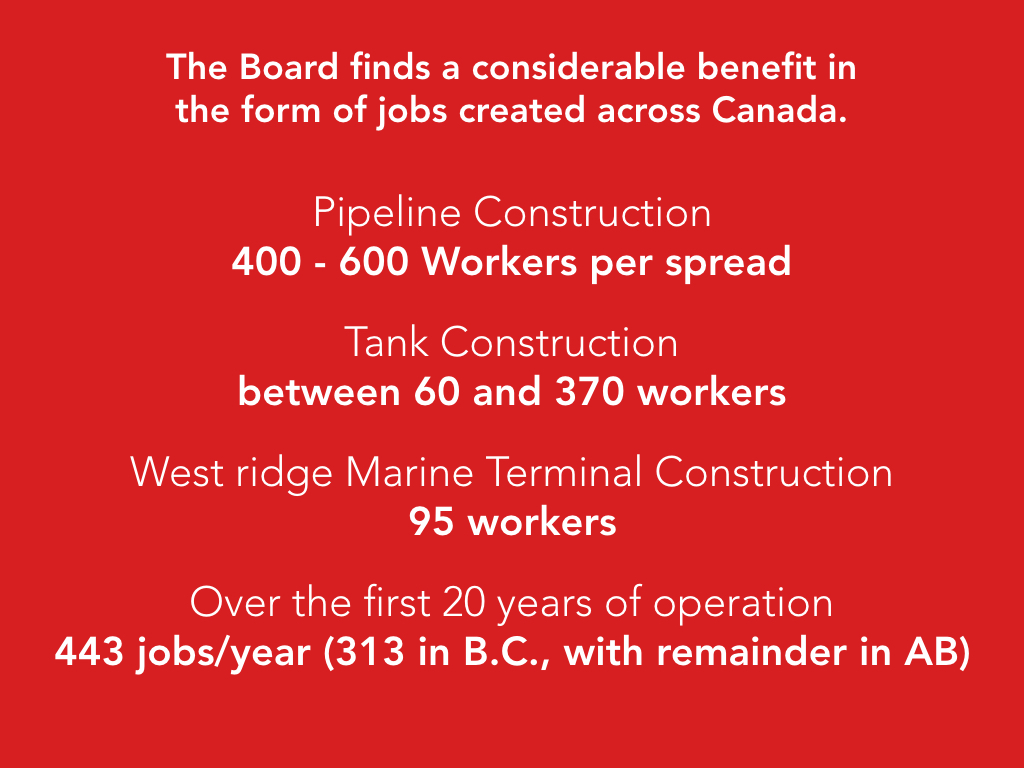 There will be short-term construction employment related to the pipeline.

However, Unifor represents 12,000 energy sector workers and 5,000 west coast commercial fishing workers and the Alberta Federation of Labour](https://docs.neb-one.gc.ca/ll-eng/llisapi.dll?func=ll&objId=2450812&objAction=browse&viewType=1) represents 170,000 unionized workers. These workers do not support the project.

Unifor and AFL said there will be a greater number of job losses in construction and permanent employment if the Project proceeds because it robs our economy of value added opportunity and crowds out existing activity particularly in commercial fishing.

The Board ruled workers concerns outside the scope of its review.

Under a proper scope of review, where an energy strategy for Canada and job losses across industries are considered, the jobs figures become negative. 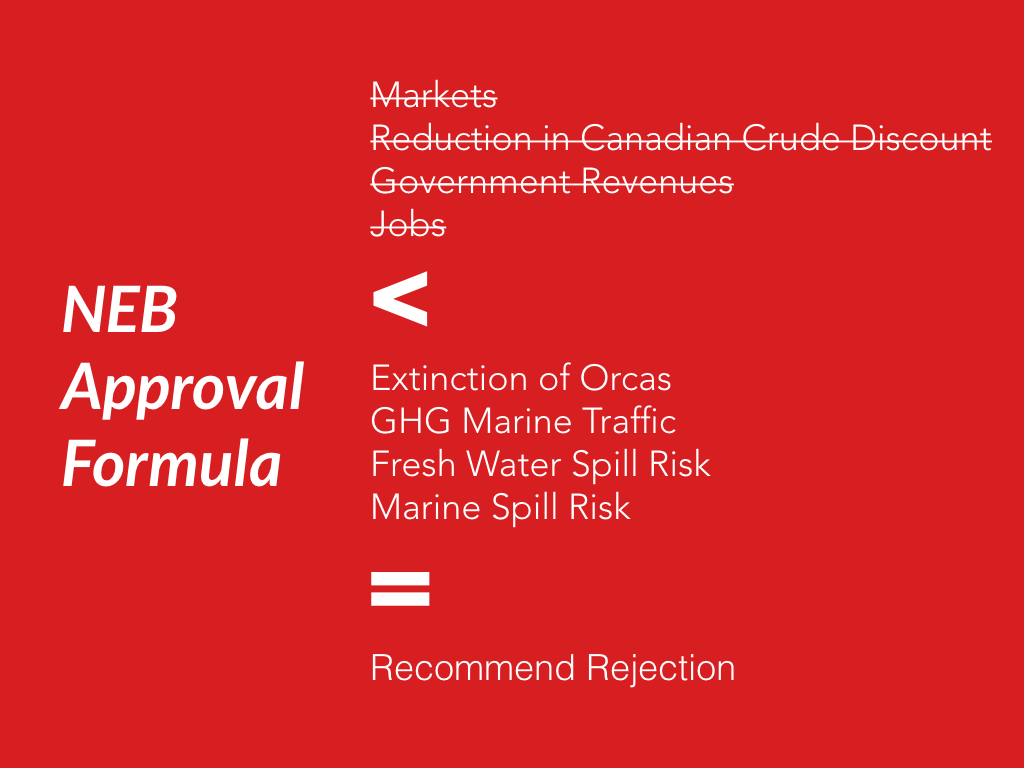 Facts show there are no existing Asian markets for Alberta’s crude oil. No reduction in crude discounts to be captured. A likely net reduction in government revenues. And net job losses.

These are not greater than residual environmental burdens.

Facts show the project should be rejected, but the Board refused to consider the facts.

The Federal government is betraying Canadians by not living up to its promise to redo the Trans Mountain review and by continuing to endorse the NEB.

Canadians are not stupid. Our public interest must be served.